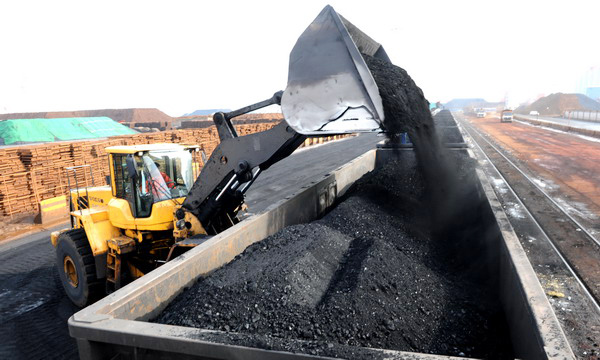 A legislator has called for more policies to encourage greener exploration of coal in an attempt to improve energy efficiency and reduce pollution.

“Society is now striving to stop extravagance on the dinner table, but what should draw more attention is energy waste,” said Bu Changsen, chairman of Shandong Energy Group, the country’s second-largest coal producer.

Bu, also a deputy to the country’s top legislature, said energy waste is extremely severe in the coal production process, which also discharges a large amount of solid waste and dust.

He said coal burning generates 70 percent of the emissions of suspended particulate matter, a major source of air pollution in China.

“Waste on a dinner table may cost money, but energy waste kills. We can grow vegetables and breed cattle, but fossil fuels are non-renewable resources.”

He also said coal mining has led to the collapse of as much as 600,000 hectares of land. To reduce such damage, Bu suggested mining should use a method where waste rock is used as filler material during the exploration process.

This process could even use sediment from the Yellow River, and such a program is likely to first be rolled out at Heze, in Shandong province, Bu said.

Companies should also improve efficiency during the washing and dressing process in coal mining, he said, and advanced technology should be introduced, such as integrated gasification combined cycle technology.

This technology uses a gasifier to turn coal and other carbon-based fuels into a gas known as synthesis gas, or syngas. It then removes impurities from the syngas before it is combusted. Some of these pollutants, such as sulfur, can be turned into reusable byproducts.

Some of these measures have been adopted by companies, but Bu called in his motion for more government support to widen such operations to the entire industry.

He said long-distance (more than 500 km) transportation of coal should be banned, along with the direct burning of rough coal. The introduction of new techniques will also improve work efficiency and reduce working hours, he said.

According to the National Bureau of Statistics, China’s coal production stood at 3.65 billion tons in 2012, accounting for 50 percent of the world’s total, and 500 million tons more than the combined volume of the other nine countries on the list of the top 10 producers.

In 2011, coal contributed to 68.4 percent of China’s total energy consumption. The National Energy Administration estimates the proportion will still be above 50 percent by 2030, when annual coal consumption reaches 4.5 billion tons.

“Coal will be a major component in China’s energy structure in the long term,” Bu said.

Many developed countries no longer explore highly polluting resources but China has to do so to fuel its economic growth.

However, “the ‘golden age’ for China’s coal industry in the past 10 years has passed, and it will never come back,” Bu said.